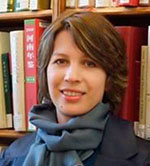 The broad area of my research is the history of East Asian science and technology, and I am particularly interested in processes of cross-cultural scientific and technological exchange that took place in nineteenth century Japan. More specifically, I study the ways Japanese scholars interpreted and adapted foreign devices, texts and images, and how this interaction shaped the way they observed, measured, calculated and represented natural phenomena.

I am currently working on a book that deals with timepieces and time-measurement in early nineteenth century Japan. Focusing specifically on astronomical time-keeping practices and devices, I follow the transformations in timekeeping technology and the notions of time associated with it.

In addition to the book manuscript I am working on several side projects in which I explore issues of textual and technological translation in nineteenth-century Japan, and starting a new research project on the history of Japanese meteorology.