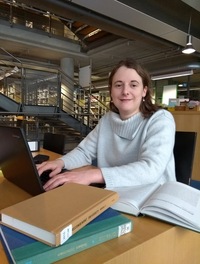 DFG-Subproject "Cooperative Competition in Big Biology: The Beginnings of the Human Genome Project in the Laboratory"

From the 1970s onwards, the life sciences have taken over the role of a leading science due to innovative technologies such as recombinant DNA and high throughput methods. Their dynamic is characterized both by a high level of competitiveness and by increasingly collaborative schemes of organisation. This development was intricately entangled with the rise of biotechnology. The Human Genome Project (HGP; ca. 1990-2003) stands as a paradigm for these developments. The HGP profoundly transformed the practices, research questions and methodologies of the life sciences. It was set up as an internationally coordinated association of independent laboratories in pursuit of one joint objective: to map and to sequence the human genome.

This project investigates how practices and conventions of cooperation were negotiated and implemented within and between participating (and thus effectively competing) laboratories during the 1980s and 1990s. Thus, the project focuses on a historical laboratory study of the research group of John E. Sulston (Cambridge, UK), which became a major player from the start, as their preferred model organism, the nematode C. elegans, had been selected for the pilot project of the HGP. Looking at the years 1985-1995, this laboratory and its embeddedness in the HGP network serves as a case for investigating how the concurrence of competition and cooperation acted towards shaping practices, methodologies and research questions, as well as the researchers’ self-descriptions and identities.

Of particular significance for these questions is the early history of the HGP, when conventions and regulations were being negotiated and established. The project will investigate the internal dynamics of the Sulston group and the close, sometimes competitive, cooperation with Robert Waterstons laboratory (St. Louis, USA). Eventually, the overarching network structure of the HGP will be examined by taking into account the role of the Human Genome Organisation (HUGO), an institution commissioned to coordinate the global collaboration in sequencing the human genome.

This project is part of the DFG-Research Group „Cooperation and Competition in the Sciences“ and is headed by Prof. Dr. Kärin Nickelsen.